The Pitkin County Jail is a division of the Sheriff's Office. It is located in Aspen, immediately behind the Court House and adjacent to the parking garage. Jail staff is available by phone 24 hours a day, 7 days a week. 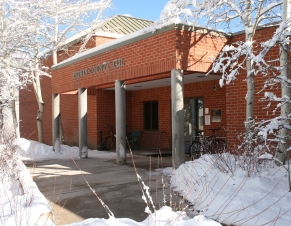 The Pitkin County Jail opened in January 1984. At the time it was the first direct supervision jail of its size in the country. While the terms “jail” and “prison” are often used synonymously in the press, jails differ from prisons in that the length of stay in jails is measured in weeks rather than years and the majority of inmates in jails are presentence offenders as opposed to prison populations which are entirely convicted persons and whose length of stay is measured in years. The Pitkin County Jail recognizes that under the Constitution of the United States, persons who are confined in a presentence status are considered innocent in the eyes of the law, until proven guilty. Fundamental to the treatment of sentenced inmates is the concept which recognizes that persons are sentenced to jail as punishment, not for punishment.

The Pitkin County Sheriff’s Director of Operations at that time was Bob Braudis and he was given the task of finding a design for a new jail that would replace the old cage that was located in the basement of the courthouse. He chose a design that incorporated a new concept called direct supervision.

The philosophy behind direct supervision provides for the creation of a more normalized jail environment as opposed to the socially abnormal environment found in traditional jails. Over thirty years of practicing direct supervision locally and in jails all over the nation has shown that 90% of inmates housed in the direct supervision environment will behave according to normal social and interpersonal expectations. Inmates who are unable to conform to these standards of behavior are separated from the general population in a more restrictive environment.

The direct supervision environment in the Pitkin County Jail includes windows that allow in outside light, carpeted floors to reduce the noise level, as well as cost effective non institutional furniture and porcelain toilet fixtures.

Inmates are allowed out of their cells from 8 a.m. until lock-down at 11:00 p.m. Inmates are free to move about their day-room or the multipurpose room, read or watch TV, play cards and otherwise interact. Detention Officers have regular direct contact with the inmate population inside the housing area. Inmates are housed in individual 65 square feet cells. Each cell has a window to the outside. Inmates have direct access to collect phone calls, mail service, regular exercise periods, and visits.

The Pitkin County Jail is accredited by the National Commission on Correctional Health Care NCCHC. Nurse and physician services, psychiatric services, as well as other medical and professional care are provided through contract. Intake screening and further testing (TB and dental) is done on all new inmates. Medical care is provided on an emergency basis. Extreme health cases are treated at Aspen Valley Hospital. Suicide evaluation and counseling is available as needed. Drug and alcohol therapy groups meet regularly. The Pitkin County Jail has been tobacco free since 1992.

Inmates are provided with clothing, bedding, and hygiene supplies. Laundry services are provided under contract with a hospital graded linen company.

PREA was passed in 2003 by the Bush administration.  The intent of this act was, as its name implies, the reduction and elimination of the chronic culture of sexual assault among incarcerated populations.  While the act is titled "Prison Rape Elimination", the standards apply to all facilities and institutions that hold incarcerated populations.  The goal of this act is to eliminate sexual assault, sexual harassment, and sexual misconduct in these populations, whether they are staff against inmate or inmate against inmate.  A major tenant of this act is zero tolerance.


*The Pitkin County Jail has a zero tolerance for sexual abuse, sexual harassment, and sexual misconduct of any kind.

*If you have any information regarding an inmate who has been sexually harassed or abused in the Pitkin County Detention Facility, you may report on behalf of an inmate here.

The Pitkin County Jail is a member of the American Jail Association. The staff is made up of professionals who understand that a respectful approach is the key to successful inmate behavior management.